HU RESEARCH GROUP AT THE UNIVERSITY OF ILLINOIS 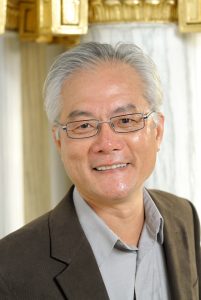 Dr. Feng Sheng Hu is Ralph E. Grim Professor of Geology and Professor of Plant Biology at the University of Illinois at Urbana-Champaign. He received his Ph.D. from the University of Washington in 1994, and joined the faculty of the University of Illinois at Urbana-Champaign in 1998. Hu served as Head of the Department of Plant Biology from 2008-2014, and is currently Associate Dean of the College of Liberal Arts and Sciences where he works with the science departments to promote research, teaching, innovation, and public service.

Dr. Hu’s scholarship integrates biological, geological, and atmospheric sciences, with the overall objective to understand long-term ecosystem dynamics under changing climatic conditions. He and his students have conducted field research from the tropics to the Arctic to address a wide array of global change questions. Research discoveries from the group include abrupt climate shifts, species refugia under extreme climate conditions, and unprecedented recent increases in forest burning. Hu is the author or co-author of more than 110 scholarly articles in top-tier disciplinary and interdisciplinary journals, including Science, Nature, and PNAS. He has served as an editor for leading ecological and geological journals (Frontiers in Ecology and the Environment; Ecology; Ecological Monographs; Ecological Applications; Ecosystems; Geology). Hu was recognized in 2000 as one of the most creative young faculty in the United States and awarded a Packard Fellowship in Science and Engineering. For outstanding research and teaching, he has been named a University Scholar of the University of Illinois, a Fulbright Scholar in France, and an Invitation Fellow of the Japan Society for the Promotion of Science. Hu is an elected Fellow of the American Association for Advancement of Science.  See abbreviated CV. 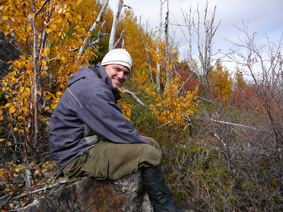 My research interests lay at the interface of plant ecology, biogeography, and evolution. Through my research, I draw joint inferences from terrestrial ecology, paleoecology, and population genetics/genomics in order to determine processes shaping plant biodiversity in space and time at various levels of organization (from genes to biomes). It is timely to improve knowledge about origin and dynamics of populations as this ought to guide the conservation efforts in mitigating the deleterious effects of ongoing climate and other anthropogenic changes.

Climate refugia are local habitats that enabled species to persist in an otherwise inhospitable region, from which they expanded when conditions improved. While climate refugia are hotspots of genetic diversity, populations in recolonized areas represent a subset of the standing genetic variation found within refugial areas. Local adaptation to climate forcing is likely to be faster from standing variation than from new mutations. Hence, it might be expected that beneficial alleles in populations of recolonized areas should also be present in the standing genetic variation of populations that resided within refugia. If so, climate refugia could be seen as a ‘reservoir of potentially adaptive variation’ that would allow local adaptation in recolonized areas during periods of rapid climate change.
During the glacial periods of the Quaternary, boreal and temperate forest tree species persisted in so-called glacial refugia. The continuous persistence of boreal tree species in unglaciated regions of Eastern Beringia (Alaska and Yukon) has been debated among biogeographers since the initial postulate by Eric Hultén, almost 80 years ago. Over the last decade, fossil and genetic evidence accumulated testifying of a presence of spruce (Picea; currently a dominant boreal forest tree taxon) during the Last Pleniglacial in Eastern Beringia, albeit the actual local-scale location of this glacial refugium remains largely unknown.
My current research in the Hu lab focus on assessing the evolutionary importance of glacial refugia with respect to current genetic diversity in recolonized parts of species ranges. I use a novel approach that integrates population genetics, species niche modelling, and paleorecords in a Bayesian statistical framework. I specifically ask whether it is possible to decipher local imprint of the species distribution during the last ice-age from postglacial recolonized areas within Eastern Beringia. Then, using population genomics approaches I assess whether beneficial alleles locally adapted to climate in recolonized area can be found in the standing genetic variation of the refugial populations. 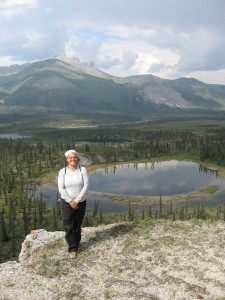 As an ecosystem ecologist with a background in geology, I use a multidisciplinary approach to examine the complex interactions between climate change and ecosystem processes. The Arctic is one of the most sensitive regions on earth to anthropogenic climate change because unique feedback processes in this region result in amplified warming. Moreover, tundra and boreal biomes contain large stocks of carbon stored in frozen soils that, if released to the atmosphere, could enhance global warming. Considering these far-reaching implications, the goal of my research is to gain a deeper understanding of how Arctic ecosystems will respond to ongoing climate change. Specifically, I use paleoecological methods to examine the link between climate change and disturbance regimes in the tundra biome.
Catastrophic disturbance events such as wildfires and thermo-erosion (ie, ground collapse in response to thawing permafrost) have increased in both frequency and magnitude in recent decades in the Arctic. These rapid disturbances may result in the release of large carbon stocks from permafrost soils, exacerbating climate warming. For example, both wildfires and thermo-erosion destroy organic soil layers, which alters surface albedo, increases permafrost thaw depth, and enhances microbial release of CO2 to the atmosphere. The exposure of mineral soils and related changes in surface hydrology may also promote shrub encroachment in the tundra, contributing the ‘Arctic greening’. Furthermore, these processes release nutrients and cations to aquatic systems, which alters aquatic communities and impacts primary productivity. Thus, these novel disturbances will likely promote more profound ecosystem changes in the Arctic than warming alone.
Evaluating the significance and impact of recent changes to tundra disturbance regimes requires a long-term perspective. I use a combination of biological and geochemical techniques to reconstruct past climate, wildfire, and thermo-erosional events in the tundra ecoregions of Alaska. Specifically, I use lake-sediment archives to 1) evaluate recent changes in tundra disturbance regimes, 2) investigate the link between climate change and disturbance regimes over millennial time-scales, 3) examine the interactions between wildfire and thermo-erosion, and 4) assess the resilience of aquatic ecosystems that have been impacted by disturbance. 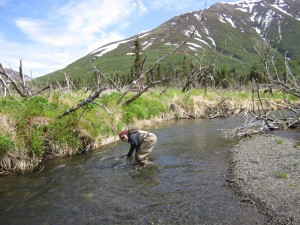 Declining wild salmon populations along the Western coast of the United States represent one of the most pressing environmental issues in North America. Every year, as millions of salmon return from the ocean to their native freshwater habitats to spawn, they export large quantities of nitrogen (N) and phosphorus from oceans to inland systems in the forms of eggs, excreta, carcasses, and emergent fry. Reductions in salmon population sizes, which are as large as 95% in some locations, are causing severe nutrient deficits in their natal habitats, threatening the overall integrity of these freshwater systems. Nutrients released by alder (Alnus spp.) might compensate for diminishing salmon-derived nutrients in aquatic ecosystems. Alder is a N-fixer, and the N compounds released from the decomposition of alder plant matter have been associated with increased stream nutrient levels and lake productivity. My research aims to: (1) investigate the extent to which alder-derived nutrients can compensate for salmon-derived nutrients, and (2) the broad spatial and temporal controls determining this in Alaskan lakes and streams. As alder is a dominant component of tundra shrub vegetation, and continues to expand in area across the Arctic as a result of climate change, results from this study have important implications for future projections of freshwater system productivity in this region. For a more detailed description of my research, teaching, and prior work experience, please visit my website here. 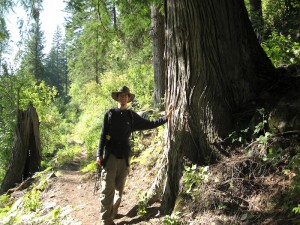 I am a PhD candidate in the Plant Biology program studying the post-glacial migration of conifers in the Pacific-Northwest. As the global climate changes, there is concern that tree species will not be able to either adapt to the new conditions or move to follow their preferred climate, and as a result risk going extinct. Trees have gone through periods of climate change in the past, however, and studying how they managed such changes can inform how future ones may impact them. The last ice age, with its expansive ice sheets, induced large-scale range shifts in many tree species and involved migration over a large area once the ice retreated. These changes provide a great example for us to study the effects of a changing climate on the distribution of tree species. A topic of particular interest is the possibility of species persisting within “climate refugia,” confined areas where a tolerable microclimate allows species to survive despite an otherwise inhospitable landscape. The presence of absence of such refugia could have significant impact on the response tree species have to a changing climate. I am using a genomic analysis technique called RAD-Seq (Restriction-site Associated DNA Sequencing) to map the modern population structure of two Pacific Northwest conifer species, western redcedar and mountain hemlock, with the goal of inferring where they spent the last glaciation and how they went on to populate the range we see today. 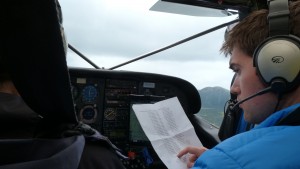 Under conditions of rapid climate change, organisms may adapt within their current range, migrate, or go extinct, with the outcome dependent on the magnitudes and rates of environmental change. Many modeling studies have predicted that anthropogenic climatic warming will lead to massive species extinctions. In stark contrast, paleoecological records show that few species have gone extinct during the Late Quaternary when major climatic fluctuations occurred — the so-called “Quaternary conundrum”. One plausible explanation for this contrast is that predictive models of future change typically do not consider ecological complexity at relatively small spatial scales. For example, localized areas of suitable conditions nested in a heterogeneous landscape may have allowed small populations of species to persist in refugia through periods of adverse climate. Although evidence is accumulating that many species have survived through past climatic fluctuations, the location of refugial populations and population-level response to climate change remain largely unknown. For my doctoral research project, I will use a novel approach that integrates genomics, species niche modeling, and paleorecords in a Bayesian statistical framework. This work will make considerable strides towards addressing how future climate variability might impact the terrestrial vegetation of the boreal forest. 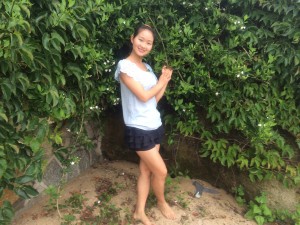 I am fascinated by plants and by the complexity of biogeochemical processes. I received a B.S. degree in Environmental Engineering and a M.S. degree in Environmental Science from Xiamen University. While attending Xiamen, I studied wetland plants and carbon cycling within coastal ecosystems. This project fueled my interest the feedbacks between carbon cycling and climatic change.
Tundra fires are widely anticipated to change in response to anthropogenic disturbances and global climatic changes. My current research focus is exploring the relationship between carbon dynamics and tundra fire regimes using a combination of terrestrial ecosystem modelling and paleo-data.